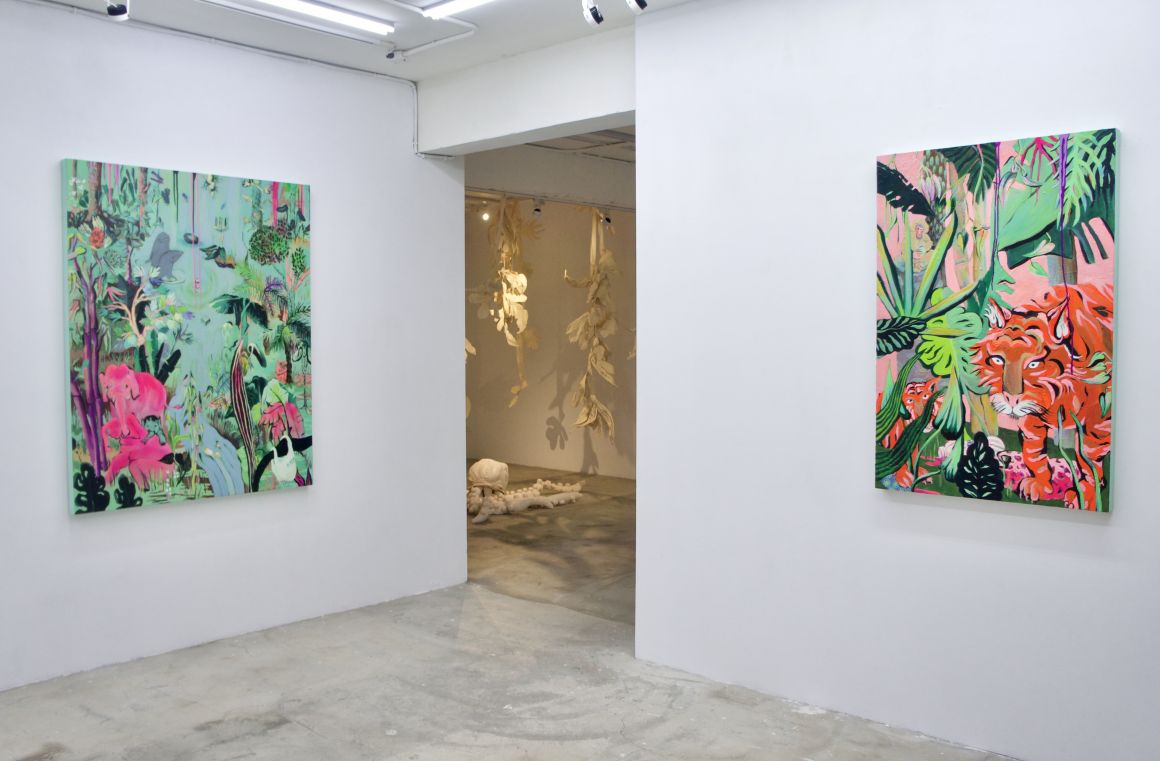 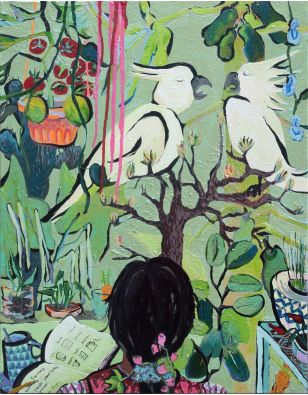 "The majority of contemporary people are dependent on industrial food, industrial clothing, industrial furniture, vehicles and countless consumer goods. The international corona crisis gives cause for thought. Supply chains are uncovered, conditions in animal husbandry or working conditions in large companies, dependencies below the countries or simply conditions in private life that hinder the flow of energy. In the painting Power for All, Corona appears symbolized as a mask with large tusks, the almost invisible but noticeable omnipresent monster. The focus here is on plants - edible plants. They are a way to a deeper energy exchange with the environment. People not only experience themselves as creators who nourish and communicate creatively, but they will also become a little more independent from constant buying." -- F.F.
↓ 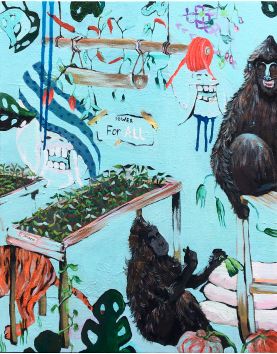 “Man is part of mother earth. He is an organ in this wonderfully complex organism. Just as the figures and objects on the paintings merge with the background and repeatedly interlock in color, the human being is woven into his environment.

If man is able to communicate with the environment, he can establish a diplomatic connection to all elements, be it animals, plants, minerals or invisible components. We have the potential to recognize all elements as part of us and to enter into resonance with them. The goal is harmony.

But if the person does not know himself and his enormous potential, he will not negotiate as brother / sister with the elements around him, including his own species, but want to dominate everyone. A selective use then arises, which can be structurally expanded to such an extent that a few beings rule over a large number of beings and elements and manipulate them in order to maintain the established hegemony. On the other hand, they are all parts of ONE organism ', only that it has a few blooming and many ailing organs.

In order to help all organs to blossom, we need holistic modes of action - economies that are good for people and the environment, economies that understand our earth as an entire social system. It is a world in which magic has a place and yet reason and a developed heart are decision makers. We also have to recognize the abundance around us in ourselves - through a spiritually oriented life.

Then humans can help to protect our biodiversity and to make the planet more liveable for humans and their animal, vegetable and mineral, as well as invisible siblings.”——Franziska Fennert

Romance between Traces of the Antropocene ↓ 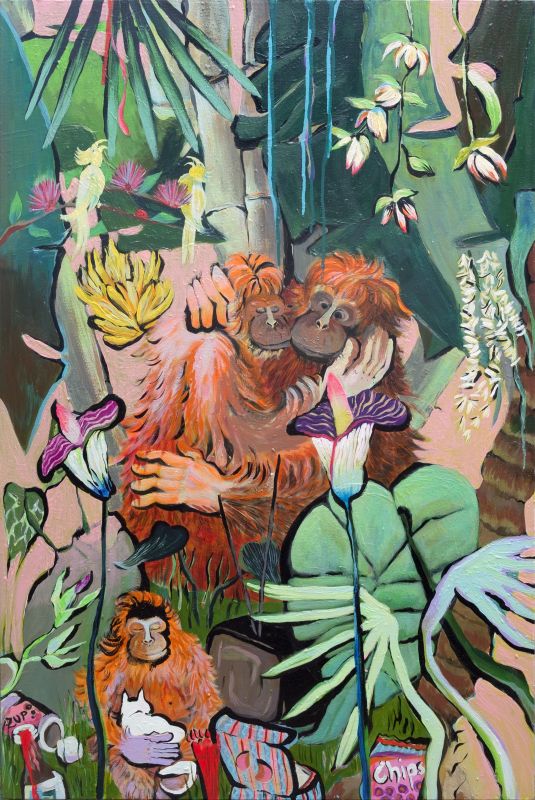 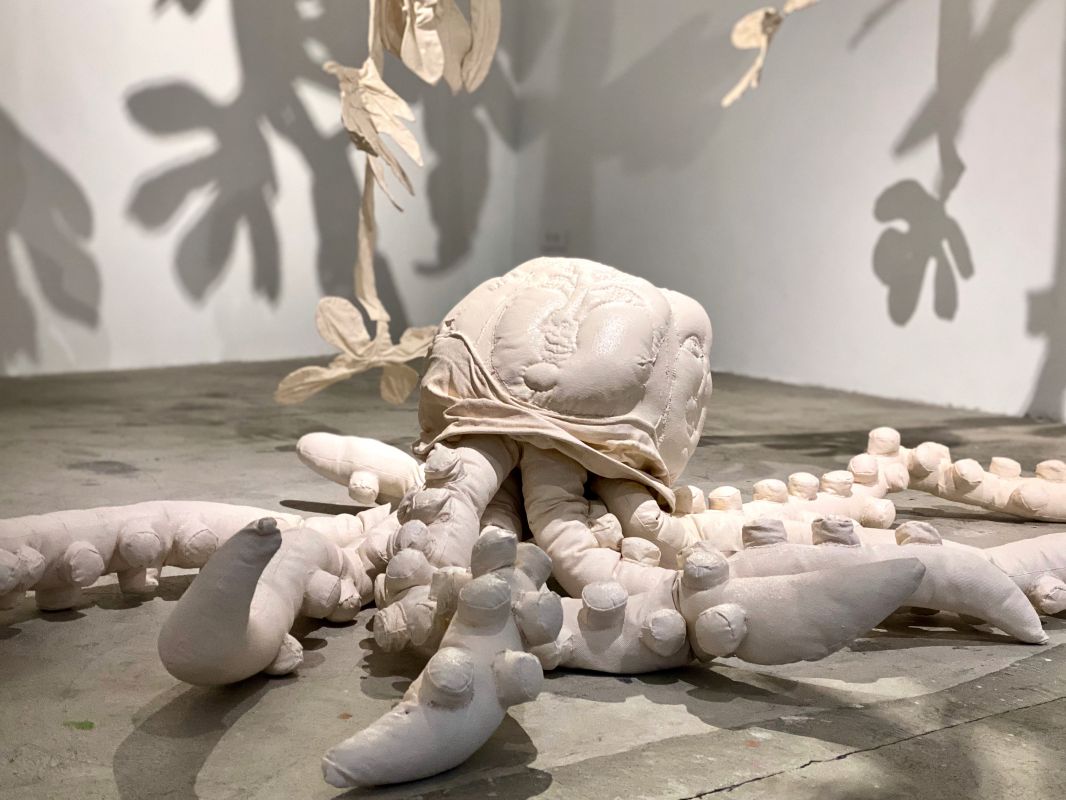 The branches we let grow / Fused to an equal conscious mind

Bizarre human figures translocate to the fantasy reserves and seemly happy animals travel between imaginative forest and human land. Yet it takes only a short while until the viewer recognize tiger’s melancholy...... all elements in Franziska Fennert’s paintings deliberately come with vibrant even “girlish” colours, distinctive and stylized brushworks to channel viewers’ engagement. Should the universe be a forest of symbols, the narrations and elements in Fennert’s works invite viewers to dive into it and encounter her optimism, borrowed from her favorite philosopher Gottfried Leibniz, and reflection: Our universe is, in a restricted sense, the best possible one. Dominating all the beings and elements in the world seems to be mankind’s current way of living – but is it the only way? Or there are possibilities should be investigated? Shouldn’t we communicate and collaborate with the other beings and elements in the world?

Narrations nourished by tales and folks

Franziska Fennert, a young artist of German origin and now living in Yogyakarta, has received numerous art awards in Indonesia, Germany and many other countries. Studying in Germany and traveling around in Europe, China and Indonesia, she develops a very personal visual uniqueness that emphasizes upon metaphors. The freedom and concentration in Chinese ink painting and Japanese wood prints, the myths in Javanese paintings, the meditation and prayer associating with Russian icons painting, flat technique and stunning space in the medieval Persian miniature (Note),and the Magic Realism of Post-expressionist─ these aforementioned artistic activities left their traces and merge effortlessly into the artist’s works, wonderful representation of her opinion, mission and biography.

Another source of Franziska Fennert’s imagination is literature. Mystifying German Romanticism folk tales, Russian literature including classis (among them Dostoevsky, Turgenjew and Tolstoy) and the vivid werewolf tales by post-soviet writer Victor Pelevin, Hermeticism from ancient Egypt, Indonesian myths, history and philosophy texts and novels...the list goes on. These spiritual expressions, from East and West, not only connect the common cause of Fennert’s works, also construct her attempt to seek alternatives or to take a critical stance against reality— “My work nourishes itself from the fertile ground of fantastic traditions, fairytales and legends” She said.

Mahatma Gandhi once said “The earth has enough resources for our need, but not for our greed.” In the enchanting rain forest of “Lost Abundance” and “Romance between Traces of the Anthropocene,” the endangered Sumatran tiger and Orangutan live and hug in the frame of love, so much so that one could overlooks the plastic garbage and electronic devices. Both work talk about how mankind, being peremptory dominator and predator in eco system, deprive the habitat of living beings, and reflect how modern consumption lifestyle and non-recyclable products deplete the natural resources. Seemingly pleasant paintings are equipped with serious capacities: greed may lead to world-wide destruction, there are so much more mankind can do.

While continuing her creation of works with this serious evocation, Franziska Fennert also work with the local community in Yogyakarta to initiate a public farm, stepping up natural farming adoption. Along with animals and plants, man in “Home Farming” is once again connected with the soil, the beings within biological cycle, and the wisdoms inherited from traditional life patterns. Here Fennert provides an alternative other than consumerism. In “Power for All”, animals work, interact and play joyfully, but the semi translucent mask with large tusks appears in

the background. Is it a substitute of COVID-19 or an invisible beast created by modern lifestyle and excessive consumption? The increase in human consumption is directly proportional to environmental degradation. Through her lifestyle and works, Fennert demonstrates how she’s being cautious about economic system. 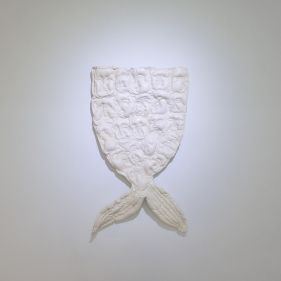 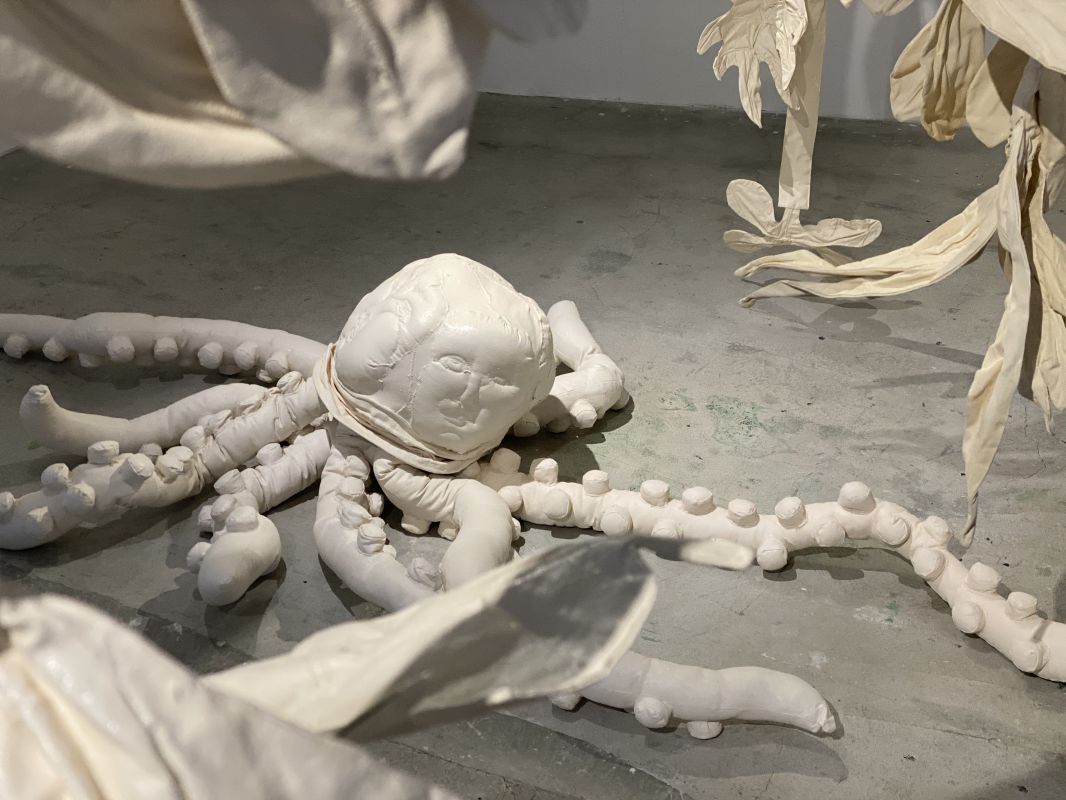 The multifaceted mediator of unity

In Fennert’s installation the one body with several faces refers to the impossibility of separating them, because one part cannot live without the other. Taken and extend from Janus, the god of transition and settling of disputes from Roman mythology, the installation becomes a perfect metaphor of relativity, pluralism, power and polarities. While revealing her optimism in communication and diplomacy, her concerns are rather obvious: conflicts between environment and mankind, differences between human’s behavior and belief, the alienated value in capitalism dominated economy, and the capital and geopolitical control by the history of colonialism and imperialism and.

An epitome of time and unity of spiritual and earthly phenomenon, “We Are One” featured a fish tail clustered with faces. This symbol of posterity refers to mankind subconscious of generations and possibilities of fusing various aspects from different cultures. And we also have to be aware of power and diplomacy. The “Fused to Raise an Equal Conscious Mind” is reaching out its soft tentacles, with four faces directed against each other but sharing one same body, Implying the global dynamics and necessity of communication and sharing. Do octopus’ tentacles, wonderful symbol of control and power, talk about power transition in global politics, government’s global spying activities, or simply remind us: everyone is his or her own ruler? In “The Return of Birds to Tuban”, Brahma, the creator and wisdom god in Hinduism appears to be guarding human and all species, is summoning birds in the forest, where conservation policies have been implemented. Fennert has entrusted Brahma with her utopian hopes and dreams.

Franziska Fennert once mentioned that “If we believe in something it can become true, become reality. That’s how active imagination works.” Blending reality and dream state, contemporary society and fantasy, utopia and dystopia, unity and diversity, dignity and connection, Fennert’s works are proposals and suggestion to the present and future. She aims to pinpoint the simple truth: mankind should be sharing and being together on an equal level, especially true while the nationalist, conservative, and racist ideologies have recently become more visible across the globe. The sensible vision, presented in her work, of a multifaceted and conflicted, belonging together and equal world might be the only path leading to to the ideal and eternal homeland.

Note: Persian miniature is a richly detailed small scale painting. It is considered as one of the important art genre in medieval period. 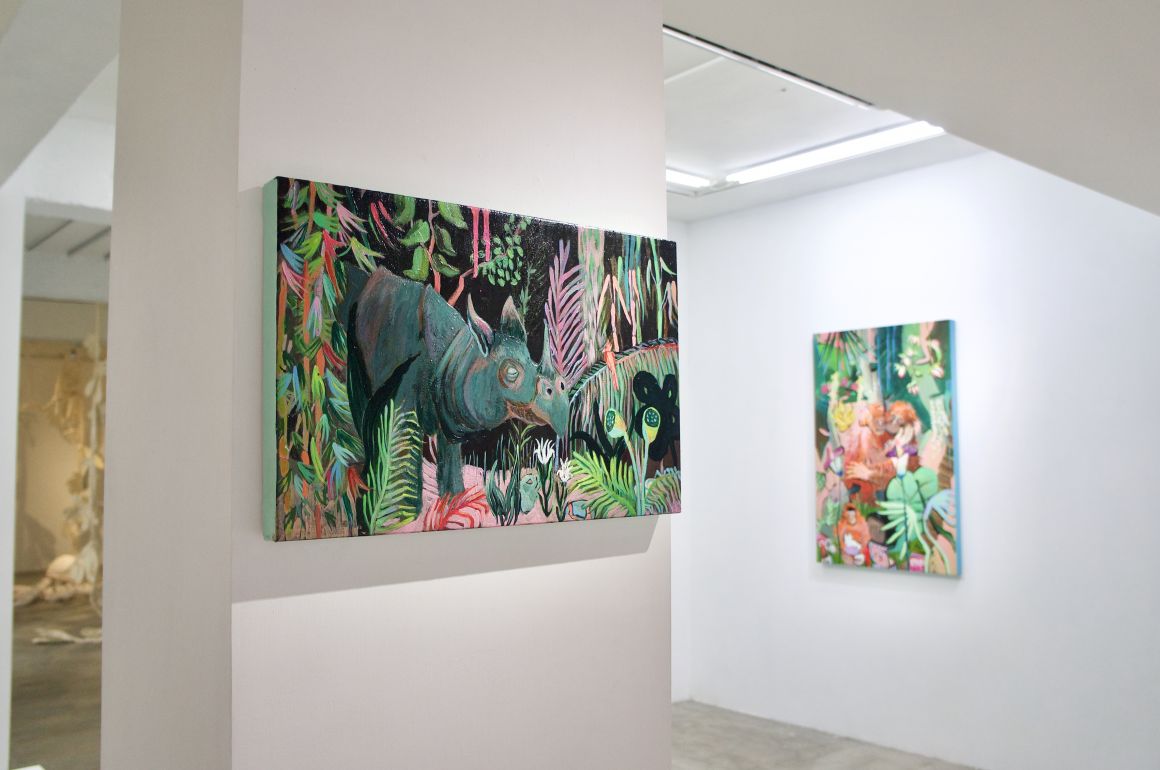